Hotels for wildlife in Ross, Tasmania

First year Architecture and Design students from the University of Tasmania have created a series of species hotels to help restore habitats for local wildlife. The Species Hotels form a sculpture walk along the banks of the Macquarie River at Ross.

The structures celebrate and communicate the important work by Greening Australia, University of Tasmania, the Department of Education, landowners and community to relink and restore vital habitat through 800,000 tree plantings.

Educational Strategist Nel Smit from Greening Australia said the Species Hotels represent some of the key things that native wildlife need to live and thrive in a rich and diverse landscape – shelter and access to food.

The hotels are designed in a way to encourage insects to nest, acting as a form of room service for birds, bats and other mammals

First year university student Saki White took part in the project to create one of five new structures, which were installed at Ross in November 2019.

The Species Hotel Project involved looking into Ross and its biodiversity, so we could design and make species hotels for these endangered animals to hopefully improve their numbers and increase their life

The students carefully selected materials and construction methods that are friendly to the environment, durable and cost effective for 3 to 5-year life span.

The work has been informed by workshops held with researchers, school children, artists/ designers, and landowners at Ross. Over 1000 people have contributed to the consultations, educational, and construction activities since 2016.

In 2019, five new hotels were donated and introduced to the environment. The University’s Discipline of Architecture and Design intends to introduce further Species Hotels into the future as their collective knowledge expands with the rest of the teams involved in the greater restoration project.

Are you interested in Architecture or Design? Learn More 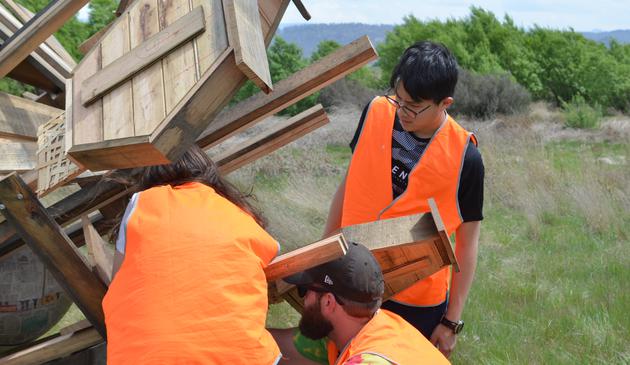 Hotels for wildlife in Ross, Tasmania
Still wondering where to begin?