I’m a historian, but I’m not my family’s historian. That honour falls to my mum, who for the past twenty years or so has been delving into the lives of my ancestors. Mum started doing the family history after I began studying Australian history at university. The death of my grandmother prompted me to ask Mum to find out what she could from the older generations of our family – the aunts and cousins and family friends who she knew, but I didn’t.

Over the years, as Mum and I have chatted about my research into Chinese Australian history, and her research into the lives of my ancestors – whose heritage was Scottish, English, Northern Irish and German – I’ve been pleased, and sometimes a bit surprised, to realise the connections between the two.

As a historian, much of my research has been about mixed-race Chinese-European families who lived in Australia in the late nineteenth century. Most of the Chinese immigrants who came to the Australian colonies were men, and a perhaps surprising number had relationships, and formed families, with white women. Marriage records for New South Wales and Victoria document hundreds of these relationships between the 1850s and the turn of the twentieth century, while many other couples lived together and raised families outside of marriage.

With my interest in mixed-race Chinese Australian families, I’m often asked if that interest comes from having Chinese ancestry myself. The short answer is ‘no’, but it turns out that there are several Chinese connections in our extended family, including a great-niece of my great-grandmother who had a daughter with a Chinese partner in Sydney in the 1940s, and a cousin of my great-grandfather who married a woman of mixed English-Chinese descent in Queensland in the 1920s. Given the racism of the White Australia period, earlier generations have sometimes been reticent to talk about Chinese ancestry, and many family historians I’ve worked with have only uncovered a Chinese ancestor after they started researching their family tree.

As I’ve traced the lives of early Chinese families in colonial Australia, I’ve also seen how the lives of my white ancestors might have crossed paths with their Chinese neighbours. I have ancestors who were on the goldfields at Braidwood in New South Wales and Castlemaine in Victoria – places where young Australians of Chinese heritage went to school, played sport and attended church alongside their white counterparts. While I can only imagine such goldfields interactions for my own ancestors, there is one Chinese connection that I have come to know more about.

My paternal great grandparents, Harry Bagnall and Florence Bellamy (both migrants to New South Wales – he from Dudley in England and she from Dunedin in New Zealand), were pioneers in the sport of cycling in Sydney in the 1890s. In 1892, Florence was one of four women elected as honorary members of the Sydney Bicycle Club, ‘in consideration of their being the first ladies in Australia to take up the pastime of cycling’ (Evening News, 21 May 1892, p. 5). Florence met Harry through their mutual interest in cycling, and he was an active member of League of Wheelmen and competed professionally in the mid-1890s. 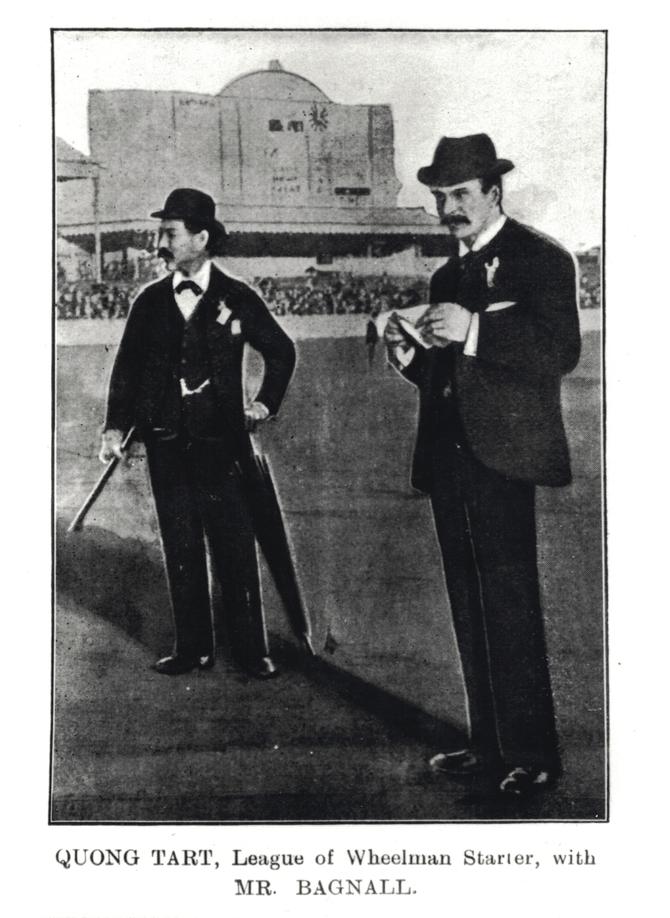 Another migrant to New South Wales, one who had arrived a good three decades before my great grandparents, was also involved in the League of Wheelmen. Chinese merchant Quong Tart had arrived in the colony as a nine-year-old boy in 1859 and, having made money on the Braidwood goldfields, set himself up in business in Sydney. In the 1890s, cycle club meetings were held in Quong Tart’s tea rooms in King Street and for some years he was a starter at League of Wheelmen races.

Quong Tart married a young English woman, Margaret Scarlett, in 1886 and together they had six children, four daughters and two sons. Quong Tart died prematurely in 1903 and, in 1911, Margaret Tart published a biography of her late husband titled, The Life of Quong Tart. Among the photographs in the book is one of Quong Tart and my great grandfather officiating at a bicycle race meeting together, taken sometime around the turn of the century.

In my research into mixed-race Chinese Australian families, I had read Margaret Tart’s biography and looked at the Tart family papers held by the Society of Australian Genealogists in Sydney and the State Library of New South Wales. But I hadn’t really noticed the caption to the photograph – ‘Quong Tart, League of Wheelman Starter, with Mr. Bagnall’ ­– until a historian friend, Sophie Couchman, pointed it out. ‘Was this “Mr. Bagnall” any relation?’ she asked.

I hadn’t known of my great grandfather’s cycling prowess, nor my great grandmother’s pioneering role in women’s cycling, and the discovery of the photograph set Mum (and me) off on a new research journey. Every time I look at the picture I’m reminded of the serendipity of historical research, and of the intriguing connections we can find when we explore the broader stories of our ancestors’ lives.

Dr Kate Bagnall is Senior Lecturer in Humanities and Coordinator of the Diploma of Family History at the University of Tasmania.

Interested in learning more about your family history - why not study the Diploma of Family History.

Margaret Tart, The Life of Quong Tart, or, How a foreigner succeeded in a British community, W.M. Maclardy, Sydney, 1911