If you’ve never seen a handfish before, imagine dipping a toad in some brightly coloured paint, telling it a sad story, and forcing it to wear gloves two sizes too big. Welcome to the bizarre reality of one of the ocean’s weirdest life forms.

Tens of millions of years ago, these ancient creatures were spread out across the globe, using their hand-like fins to saunter along the seabed.

But for reasons that remain a mystery, handfish are now only found in the waters off southern Australia and Tasmania, and they’ve earned the dubious honour of being one of the rarest types of fish on the planet.

“This is the final refuge for this family of about 15 species,” said Graham Edgar, Professor of marine ecology and conservation science at the University of Tasmania.

Where are all the handfish?

It’s often said that we know more about the surface of the Moon than we do about our own oceans, and this is in no small part down to the fact that we simply don’t have enough scientists to scour Earth's watery depths.

So in 2007, Edgar decided to team up with recreational divers to see if they could contribute scientific data on species numbers and distribution on a scale that professional researchers could not facilitate on their own.

The Reef Life Survey has since recruited more than 200 divers, and they’ve been responsible for locating several red handfish (Thymichthys politus), which are so rare that only about 10 individuals form the largest known population.

“We decided that the best way to move forward with broad-scale research was to find the best divers and support them on a one-to-one basis, thereby developing a volunteer scientific dive team,” Professor Edgar said.

“We ended up with a cohort of volunteer divers that are producing data as good as any research dive team.”

With their lovely big mittens, it might seem like handfish have it made in the locomotion department, but it’s their commitment to staying put that could be what’s driving their steady decline.

What sets handfish apart from nearly all the other fish species is that they don’t have a ‘planktonic larval’ stage, where newly hatched larvae get caught up in currents to be deposited tens to hundreds of kilometres away from their original population.

Instead, handfish skip the larval stage altogether, and hatch from their eggs in more or less their adult form – only miniaturised. And that can be bad news if their original habitat is threatened with rising ocean temperatures or pollution.

Handfish produce an egg mass, which they incubate and guard. Miniature adults hatch from these, and then ‘walk off’ along the seabed.

“The issue is that without a dispersal stage – populations that decline have great difficulty recovering.”

It’s like finding a needle in a haystack, so sending a scientific team out to find them is not cost effective.

“But by getting the recreational divers involved, we’ve got more eyes under the water by several orders of magnitude.”

And in case you’re wondering what they look like when they move about, here’s some footage of some captive red handfish up close: 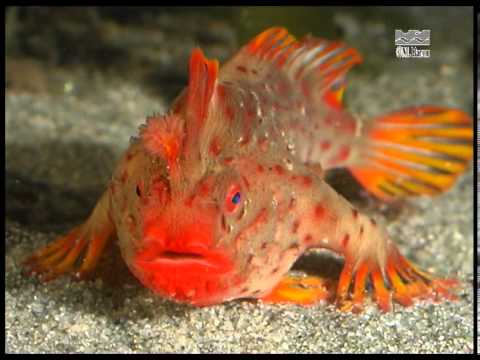 Find out more about the Reef Life Survey.

On the trail of the London thylacines

An archive of bodies...