This subterranean habitat can range from a single burrow to a complex network of burrows with multiple entrances.

While they tend to sleep alone, wombats change burrows weekly and it is believed that this behaviour contributes to the spread of sarcoptic mange – a disease caused by a small mite that burrows into their skin and leads to death for infected individuals.

“Wombats sleep inside a bedding chamber in the burrow, and we think that transmission of mange between wombats occurs because mites fall off one wombat and are picked up by another when they change burrows.

“We think that is really important, but it is hard to demonstrate and it is mostly because we are all too big to get in there. We have been trying to find a way to get into wombat burrows so we can at least get some environmental measurements, because temperature and humidity are really important for how long the mite can survive off its host.”

Dr Carver and his team are currently using ground-penetrating radar to map the burrows from above ground and will integrate this environmental data with laboratory data that has already been generated to understand how long mites survive down wombat burrows.

They are also working to see if a robot can be designed to negotiate the bumpy and changeable terrain inside a wombat burrow.

This information will be key to understanding the epidemiology of mange disease in wombats. 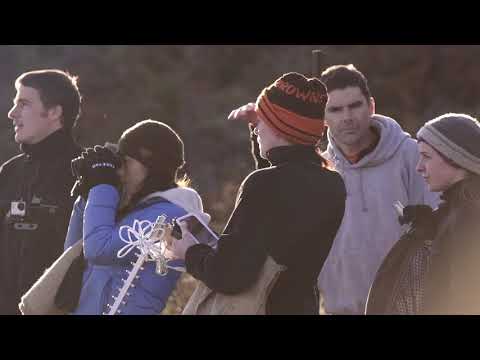 Sarcoptic mange is the most common disease affecting bare-nosed wombat populations across south-eastern Australia. There are records of the disease in Tasmania dating back 200 years, linked to its introduction to Australia by European settlers and their domestic animals.

Research into managing the disease in wombats has been the focus of Dr Carver’s work for the past eight years.

In 2018, his research group published a study on an outbreak of mange at Narawntapu National Park, Northern Tasmania, which showed the collapse of the local wombat population. They subsequently conducted a trial to see if they could eradicate mange from Narawntapu using a treatment called Cydectin.

“What we saw was that we were able to control the disease while we were intensively treating the population, but after we stopped, the disease came back. Basically, we were not able to locally eradicate it,” Dr Carver said.

“One of the outcomes of that research was to ask how we could get better at disease control. The major findings were the need for a longer-lasting treatment and greater population coverage of treatment.”

For the past two years, the team has been trialling a new longer-lasting drug, Bravecto, to determine its effectiveness in treating and protecting wombats from mange.

The outcomes from captive trials in Tasmania and New South Wales are promising, with results suggesting a single treatment of Bravecto can protect wombats from mange disease for at least one to three months.

By comparison, the previous treatment needed to be administered once a week for 12 weeks which proved extremely difficult to administer to wild wombats.

“Bravecto is the longest-lasting treatment that we have, so it is our best option for the wombats. We are not going to eradicate mange, but we can get a lot better at controlling it for individuals and for small sub-populations of wombats,” Dr Carver said.

The study is entering the next phase with a series of field trials planned over the next 12-24 months, targeting wombat populations in North-East Tasmania and New South Wales.

The results will be used to develop treatment policies for animal welfare groups across south-eastern Australia who care for wombats with mange disease.

“There are a lot of people from the community with no scientific or veterinary training who treat wombats with mange disease. We are trying to provide them with some informed guidelines so that they can be more effective with what they are trying to do,” Dr Carver said.

And with more than 100 species of animals impacted by mange around the world, the research could have even broader impact in terms of wildlife disease management.

“We are absolutely at the forefront of wildlife disease control,” Dr Carver said.

“Koalas get impacted by mange, as do southern brown bandicoots in Perth, and then all these other species around the world. Our research will help understand whether this product could be used for them and also how we might go about trying to look at disease control.”

Dr Carver’s work is funded via a range of government and private funding, and anonymous bequests from generous individuals enchanted by wombats.

If you would like to support this research you can donate here.

Scott Carver is a lecturer in wildlife ecology in the School of Biological Sciences at the University of Tasmania. He specialises in the ecology and epidemiology of infectious diseases, spanning wildlife, domestic animal and human health.

Real-life learning in a great location

The Master of Marketing Management was the best choice for Rebecca Byfield to build on her skills.