The University of Tasmania is consolidating into Hobart's CBD

We thought it would be helpful if we provided some details around why and how it’s happening, and what it will mean for Tasmania and Tasmanians.

A lot of people are talking about it, so we thought it would be helpful if we provided some details around why and how it’s happening, and what it will mean for Tasmania and Tasmanians.

It’s a big change for Hobart. We understand that, which is why it’s a decision we’ve taken seriously. We’ve spoken to a lot of people about it, and many of those conversations are ongoing.

But most importantly, it’s an opportunity for Tasmania to have a truly world-class campus, right here in Hobart. A campus that will enhance our capital, provide increased opportunities for Tasmanians, and live at the heart of our culture.

What's wrong with the existing campus at Sandy Bay?

The older buildings at the Sandy Bay campus aren’t faring too well. The facilities there don’t meet contemporary standards around accessibility, sustainability and student experience. And it’s worth remembering that a lot of the University is already in the CBD: IMAS, Menzies, the Hedberg, the Conservatorium of Music and the School of Creative Arts and Media. The campus is already fragmented.

We were faced with the choice of repairing and upgrading our older buildings in Sandy Bay, or consolidating the campus in the city with modern infrastructure and facilities. We extensively evaluated both options, and it became clear that the best option for the future of both the University and higher education in Tasmania was to consolidate in Hobart’s CBD.

Most of the old campus at Sandy Bay will be turned into a mix of housing, aged-care facilities and retail and community precincts. But we’re preserving the bushland and upgrading the sporting facilities.

How will it affect students?

This move is being made with our students firmly in mind – improving access to higher education is the main reason we’re doing it.

We know that the easier it is for students to get to campus, the more chance they’ll enrol, and the more chance they’ll succeed in their studies. By consolidating our campus in the CBD, we’ll be making it easier for students from a wider range of backgrounds to access the University. For students from Moonah, Geilston Bay, Lenah Valley, Rosny Park and Acton Park, their travel time will be halved. For those coming from outer suburbs, they’ll no longer have to transit through the CBD. This will be especially helpful for those students who need the flexibility of balancing their studies with other commitments such as work, caring and parenting.

This is important not just because we want more students attending the University, but because it’s vital that all Tasmanians have the opportunity to pursue higher education. By making it easier for students to access the University, we’re improving their ability to enrol and succeed.

Isn’t this really a financial thing?

Finances are an important part of our decision. But not because the University stands to significantly profit by redeveloping part of our Sandy Bay properties. The truth is far simpler: there’s been a steady and significant decline in government funding for higher education in Australia. Over the years, this has meant that we’ve prioritised the teaching and research that lies at the heart of the University, at the expense of upgrading our physical infrastructure. That’s why the buildings at Sandy Bay are run down.

And part of the reason that’s happened is because the University of Tasmania has to do a lot more with its resources than other universities of the same size. We’re the only provider of higher education in the state; it’s a big responsibility, and one we take seriously. We don’t have the luxury of specialising in specific disciplines, and we have chosen not to streamline our offering to a single campus. We need to offer as much as possible, to as many Tasmanians as possible.

That’s why we have campuses on the Cradle Coast and in Launceston. It’s why we offer such a diverse range of courses. We have to be there for every Tasmanian who wants to pursue higher education. We’re proud that we can do that, but it’s a lot more expensive than what other mid-size universities have to contend with.

With all that said, we still have a lot of financial resources to draw from. We’ve managed our finances prudently and we’re in a lot better shape than many mainland universities are. Yet arriving at this point was inevitable. And it’s clear that consolidating in the CBD will allow us to build world-class facilities right here in Hobart – facilities that will not only attract students, but also researchers, educators and academics of the highest quality.

The development of Sandy Bay will also provide an ongoing income stream to support the University’s teaching and research into the future. It’s a better financial option for the University, and by attracting leading thinkers to the island, while also growing our own, it’s also a better option for Tasmania. Tasmanians deserve world class facilities and they shouldn’t have to leave the island to get them. 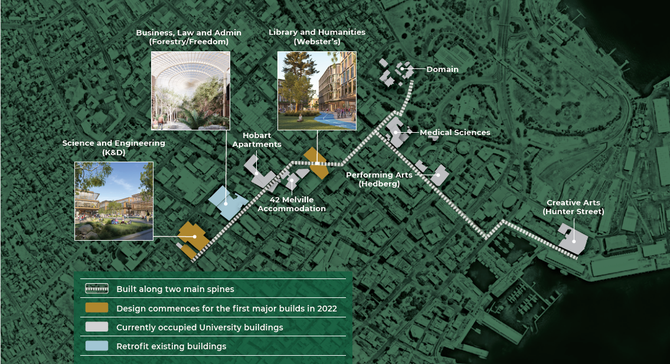 Masterplan showing the five interconnected precincts of the city-based campus in nipaluna/Hobart.

But won’t it change the CBD?

Undoubtedly. You can’t make a move this big and expect nothing to change. As more people spend time in the CBD, there might be a bit of an adjustment period for all of us. But more life in the city means more money being spent in local businesses, especially small businesses. To begin with, we estimate that this move will result in around $550 million being spent on construction capital.

We realise that a lot of Tasmanians have questions about how this move will affect traffic in Hobart. It’s a serious concern, so we commissioned some research, and found that consolidating our campus in the city will actually improve traffic flow. This is because there’ll be less cross-town travel – people getting from Montrose to Sandy Bay, for example – which will result in a reduction of 10 cars per minute during peak hour. Plus, because the CBD is easier to access via public transport and active transport networks (like bike paths), fewer people will need to drive at all. Our city-centric model will actually take cars off the road – around 475 of them each day.

Even with car numbers predicted to drop, we’re making sure any additional parking is taken care of. Once complete, our combined facilities in the CBD will have the capacity for up to 1700 parking spaces. It’s more than we’ll need, but having that much capacity will always be helpful. And these parking spaces will be built in a way that makes it easy to convert them to other uses in the future.

But what about Sandy Bay’s campus culture?

Many of us have fond memories of life at the Sandy Bay campus. But the truth is that campus life has changed a lot over the last decade, with one of the biggest shifts being the makeup of our student body. In simple terms, far fewer of our students are straight out of school, and far more are studying part-time, as they balance work and family commitments. This means students are spending less time on campus than ever before.

Part-time work is a non-negotiable part of life for most of our students. But the current campus in Sandy Bay isn’t close to where many of them are employed. The CBD, however, is another story. There are 7 times as many jobs in the city than Sandy Bay, and it’s easier to get to those jobs, due to the better public transport options. And this isn’t just good news for students – it’s great for the small businesses, hospitality venues and services of the CBD as well, for two major reasons: it’ll be easier for them to hire staff, and there’ll be more people in the city spending money.

Studying in the CBD will make life simpler for our students, and means they’ll spend less time in transit. And when getting to work is easier, the decision to study becomes easier, too.

What about all the people who aren’t part of the University?

Say you don’t study or work at the University – you might wonder how this could affect you, or others like you. This is where it gets really exciting. Because by consolidating in the CBD, we have an opportunity to fundamentally change how we, as a city and a people, interact with our University.

Take the Hedberg, for example. It’s connected to the Theatre Royal, and has been designed as collaborative space for artists and performers. Much of what is created there will be on display to the public, not just members of the University. Around the corner, the proximity of our Medical Sciences Precinct to the Royal Hobart Hospital means our medical students and researchers interact with the people of Hobart on a day-to-day basis, breaking down traditional barriers between academic institutions and the public. As we move more and more of the University into the city, more of it will be accessible to everyone. The research, thinking, artwork and ideas that are incubated at the University will be closer to life in Hobart than ever before.

Plus, more people growing up in Hobart will be surrounded by University life than ever before. Going to Uni should be normal – it shouldn’t feel like something exclusively for people from affluent communities. We want everyone to feel welcome.

All of this means that the University of Tasmania will be more connected to the people of Tasmania. Because that’s what’s most important here: making sure Tasmanians have access to higher education in the future, forever.

By consolidating in the CBD, we’re making sure that future is certain. We’re helping blend our city’s culture with our brightest thinkers. We’re enhancing our facilities and improving the lives of our people. We’re building the campus Hobart deserves – the one Tasmanians deserve.

Where is the data and plans to support the move?

Find out more about the southern campus we're creating in the city-centre of nipaluna/Hobart and the redevelopment of the Sandy Bay campus site.