will be presented by

Ambassador and Head of Delegation of the European Union

The European Union and Australian Free Trade Agreement is fueling momentum in bilateral relations. This momentum has significant ramifications for Tasmania as it will pave the way for new market opportunities in a range of areas from agriculture and aquaculture to greater cooperation in Antarctica. On the global stage, this momentum has spread beyond trade to other areas such as formalising an upgrade in the legal agreement, expanding space relations and working closer together on international security issues. 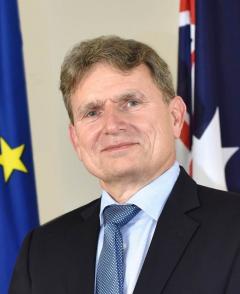 Dr Michael Pulch is the European Union Ambassador to Australia, following his previous term as EU Ambassador to Singapore. Before that Dr Pulch headed the Russia Division in the European External Action Service in Brussels, where he coordinated EU policies on Russia and chaired the EU Interservice Group on Russia. From 2006-11 he was posted to Beijing as Deputy Chief of Mission of the EU Delegation to China, in charge of EU policies on China and relations with Mongolia.

Dr Pulch entered the German Ministry of Foreign Affairs in 1986, serving in the United Nations Directorate, before he was attached to the German embassy in Seoul as political officer. During his posting to Washington as deputy head of the Economic Section he covered economic aspects of security policy.

In 1995 Dr Pulch joined the US Division of the European Commission in Brussels focusing on US foreign and security policy. From 1999 to 2003, he was posted to the EU Delegation in Tokyo, where he headed the Trade and Commerce Section that defines EU trade policy objectives for Japan. As deputy head of the European Commission's East Asia Division in Brussels until 2006 he worked on political and economic aspects of EU relations with countries in the Far East/Australasia region. He also co-authored the EU's first East Asia Policy Guidelines.

Dr Pulch holds degrees in law and political sciences from the universities of Bonn, Paris and Cambridge. He speaks English, German, French and Dutch.

Sir James Plimsoll was one of the most distinguished diplomats in the history of Australia’s Department of External Affairs (later the Department of Foreign Affairs and Trade). The previous Foreign Minister,  Alexander Downer, has labelled him ‘Australia’s greatest ambassador’.

After serving in the AIF in the Directorate of Research and Civil Affairs, Plimsoll was appointed to the Far Eastern Commission, tasked with overseeing the Allied Council for Japan during the occupation of that country. In 1948 he was appointed a First Secretary of the Department of External Affairs, and in 1950 was sent as the Australian representative to the United Nations Commission for the Unification and Rehabilitation of Korea (UNKURK), where he formed a close working relationship with Sygman Rhee, the South Korean President.

He later served as the highly popular and respected Governor of Tasmania from 1982 until his death on 8 May 1987 – only shortly after having his initial five-year term extended.