We are all born equal in dignity and rights.

The statement not only forms the core for the Universal Declaration of Human Rights, it is also the opening line of Citizen – a Tasmanian documentary film exploring what it means to be a citizen and the social injustices inflicted on so many.

The work of UTAS’ Bachelor of Arts and Bachelor of Laws student, Grace Williams, Citizen features 10 Tasmanians who share their human rights stories across war and conflict survival, statelessness, sexual and physical abuse, discrimination and Indigenous discrimination, genocide as well as racial vilification.

Emigrating to Tasmania from Ghana in West Africa, Grace is determined to make a difference in our community. Director of Citizen Tasmania in Hobart, Grace works to create reflective community spaces to discuss human rights issues and challenges. Through storytelling, her team builds capacity within communities to engage with human rights abuses and challenges.

Join Associate Professor, Meredith Nash, in conversation with Grace as she shares her initiatives, experiences and film on the 20th anniversary of Australian Citizenship Day. Moderated by Professor Kate Darian-Smith, Executive Dean and Pro Vice-Chancellor of the College of Arts, Law and Education Grace Williams is the Director of Citizen Tasmania and a powerful young community activist shaping grassroots capacity across Australian communities. In her final year of law and recently shortlisted as Tasmania Young Australian of the Year, Williams Founded and Directed Citizen Tasmania in 2019 to provide activists with strong advocacy and creative tools to strengthen human rights in their local communities. She has since directed films and presented internationally on the importance of engaging communities and empowering activism. Williams has been internationally recognised for her contribution to community development and was awarded Tasmanian Human Rights Youth Award in 2020. 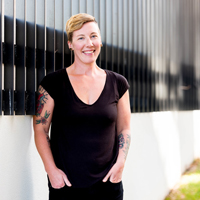 Moderator Professor Kate Darian-Smith is passionate about understanding the social and cultural changes that have shaped Australian peoples and places. As a leading historian of Australia, she is known for her distinctive cross-disciplinary approach, and her engagement with cultural heritage and the ways that historic events are publicly commemorated.