The decline of Tasmanian devils is having an unusual knock-on effect: animal carcasses would once have been gobbled up in short order by devils are now taking many days longer to disappear.

We made the discovery, published today in the journal Proceedings of the Royal Society B, by placing carcasses in a range of locations and watching what happened. We found that reduced scavenging by devils results in extra food for less efficient scavengers, such as feral cats.

Tasmanian devils have struggled for two decades against a typically fatal transmissible cancer, called devil facial tumour disease. The disease has caused devil populations to plummet by about 80% on average, and by up to 95% in some areas.

DFTD has spread across most of Tasmania over a 20-year period. Dashed lines show the estimated disease front. Calum Cunningham/Menna Jones

Scavengers are carnivores that feed on dead animals (carrion). Almost all carnivores scavenge to a greater or lesser degree, but the devil is Tasmania’s dominant scavenger. Since the extinction of the Tasmanian tiger, it is also the island’s top predator.

In our study, we put out carcasses of the Tasmanian pademelon (a small wallaby weighing roughly 5kg) in a variety of places, ranging from disease-free areas with large devil populations, to long-diseased areas where devil numbers are very low. We then used motion-sensor cameras to record all scavenger species that fed on the carcasses. 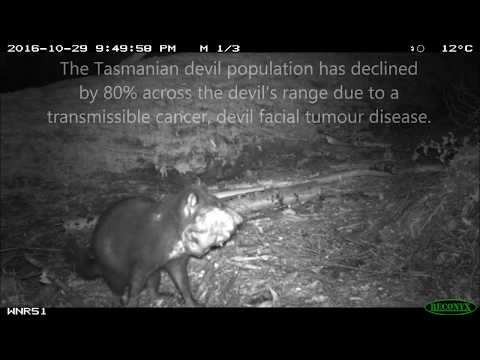 The Carnivores of Tasmania: a Scavenging Experiment.

Unsurprisingly, much less carrion was consumed by devils in areas where devil populations have declined. This has increased the availability of carrion for other species, such as the invasive feral cat, spotted-tailed quoll, and forest raven. All of these species significantly increased their scavenging in places with fewer devils.

Consumption of experimentally placed carcasses. Proceedings of the Royal Society B

The responses of native scavengers (quolls and ravens) were subtly different to those of feral cats. The amount of feeding by quolls and ravens depended simply on how much of each carcass had already been consumed by devils. Ravens and quolls are smaller and less efficient than devils at consuming carcasses, so they get the chance to feed only when devils have not already monopolised a carcass.

Read more: Tasmanian devils reared in captivity show they can thrive in the wild

In contrast, feral cats tended to scavenge only at sites where devils were at very low abundance. This suggests that healthy devil populations create a “landscape of fear” that causes cats to avoid carcasses altogether in areas where they are likely to encounter a devil. It seems that the life of a feral cat is now less scary in the absence of devils.

By looking at 20 years of bird surveys from BirdLife Australia, we also found that the odds of encountering a raven in Tasmania have more than doubled from 1998 to 2017. However, we were unable to directly link this with devil declines. It is likely the raven population is growing in response to a range of factors that includes land-use change and agricultural intensification, as well as reduced competition with devils.

Other studies have shown that cats have also become more abundant in areas where devils have declined. This highlights the potential for devils to act as a natural biological control on cats. Cats are a major threat to small native animals and are implicated in most Australian mammal extinctions.

Although smaller scavengers consumed more carrion as devils declined, they were unable to consume them as rapidly as devils. This has resulted in the accumulation of carcasses that would previously have been quickly and completely eaten by devils.

In places with plenty of devils, carcasses were completely eaten within an average of five days, compared with 13 days in places where devil facial tumour disease is rife. That means carcasses last much longer where devils are rare.

DFTD has spread across most of Tasmania over a 20-year period. Dashed lines show the estimated disease front. Calum Cunningham/Menna Jones

Around 2 million medium-sized animals are killed by vehicles or culled in Tasmania each year, and most are simply left to decompose where they fall. With devils consuming much less carrion, it is likely that carcasses are accumulating across Tasmania. It is unclear how much of a disease risk they pose to wildlife and livestock.

Large carnivores are declining throughout the world, with knock-on effects such as increasing abundance of smaller predators. In recent years, some large carnivores have begun returning to their former ranges, bringing hope that their lost ecological roles may be restored.

Carnivores are declining for many reasons, but an underlying cause is that humans do not necessarily appreciate their pivotal role in the health of entire ecosystems. One way to change this is to recognise the beneficial services they provide.

Our research highlights one of these benefits. It supports arguments that we should help the devil population recover, not just for their own sake but for other species too, including those threatened by feral cats.

The devil seems to be solving the disease problem itself, rapidly evolving resistance to facial tumours. Any management plan will need to help this process, and not hinder it. Potentially, returning devils to mainland Australia could provide similar benefit to wildlife threatened by feral predators.

This article originally appeared in The Conversation.

Professor Chris Johnson: Professor Chris Johnson is an ecologist and conservation biologist, and an expert on mammals. His research investigates many problems that are relevant to the conservation of biodiversity, in four main themes: (i) the causes of extinction of species in prehistory and the recent past; (ii) the effects on ecosystems of top predators and large herbivores, and the ecological consequences of loss of such species; (iii) the environmental history of Australia; and (iv) the management of threatened and invasive species of wildlife. Professor Johnson has written more than 140 scientific papers and a book on many aspects of the ecology and conservation of wildlife, and received awards including the Eureka Prize for Environmental Research and the Australian Ecology Research Award.

Calum Cunningham: Calum is a PhD candidate at the university of Tasmania, where he investigates the cascading ecological effects of the disease-induced decline of the Tasmanian devil. A key focus of his research is to understand whether the decline of the devil has released smaller predators, such as feral cats, from suppression and what the flow-on consequences are for smaller mammals.