On September 5, a coalition of online groups are planning an Australia-wide action called the “Day of Freedom”. The organisers claim hundreds of thousands will join them on the streets in defiance of restrictions on group gatherings and mask-wearing mandates.

Some online supporters believe Stage 5 lockdown will be introduced in Melbourne the following week and the “Day of Freedom” is the last chance for Australians to stand up to an increasingly tyrannical government.

The action is the latest in a series of protests in Australia against the government’s COVID-19 restrictions. The main issues brought up during these protests centre around 5G, government surveillance, freedom of movement and, of course, vaccinations.

Why QAnon has exploded in popularity globally

Since its inception in the US in late 2017, QAnon has morphed beyond a specific, unfounded claim about President Donald Trump working with special counsel Robert Mueller to expose a paedophile ring supposedly run by Bill and Hillary Clinton and the “deep state”. Now, it is an all-encompassing world of conspiracies.

QAnon conspiracy theories now include such wild claims as Microsoft founder Bill Gates using coronavirus as a cover to implant microchips in people, to governments erecting 5G towers during lockdown to surveil the population.

Last week, Facebook deleted over 790 groups, 100 pages and 1,500 ads tied to QAnon and restricted the accounts of hundreds of other Facebook groups and thousands of Instagram accounts. QAnon-related newsfeed rankings and search results were also downgraded.

Facebook is aiming to reduce the organising ability of the QAnon community, but so far such crackdowns seem to have had little effect on the spread of misinformation.

In July, Twitter removed 7,000 accounts, but the QAnon conspiracy has become even more widespread since then. A series of global “save the children” protests in the last few weeks is proof of how resilient and adaptable the community is. Why Australians are turning to QAnon in large numbers

QAnon encourages people to look for evidence of conspiracies in the media and in government actions. Looking back over the last several years, we can see a range of events or conspiracy theories that have helped QAnon appeal to increasing numbers of followers in Australia.

In 2015, Senator Malcolm Roberts claimed the UN’s 1992 “Agenda 21” plan for sustainable development as a foreign global plan aimed at depriving nations of their sovereignty and citizens of their property rights.

The belief that “Agenda 21” is a blueprint for corrupt global governance has become a core tenet of QAnon in Australia.

Any talk of “global bankers and cabals” directly taps into longstanding anti-Semitic conspiracies about supposed Jewish world domination often centred on the figure of billionaire George Soros. The pandemic and QAnon have also proven to be fertile ground for neo-Nazis in Australia.

2) Impact of the far-right social media

QAnon has its roots on the far-right bulletin boards of the websites 4Chan and 8Chan. Other campaigns from the same sources, such as the “It’s OK to be White” motion led by One Nation leader Pauline Hanson in the Senate, have been remarkably successful in Australia, showing our susceptibility to viral trolling efforts.

During the Royal Commission into Institutional Responses to Child

Abuse, Senator Bill Heffernan tried unsuccessfully to submit the names of 28 prominent Australians which he alleged were paedophiles.

His failure is widely shared in QAnon circles as proof of a cover-up of child abuse at all levels of Australian government. The belief the country is run by a corrupt paedophile cabal is the most fundamental plank of the QAnon platform.

A number of recent events have eroded public trust in government — from the “sports rorts affair” to the Witness K case — and all serve to further fuel the QAnon suspicion of authority figures.

Australia’s sizeable anti-vax movement has found great support in the QAnon community. Fear about mandatory vaccinations is widespread, as is a distrust of “big pharma”.

Also, the continuing roll-out of 5G technology throughout the pandemic has confirmed the belief among QAnon followers that there are ulterior motives for the lockdown. Wellness influencers such as celebrity chef Pete Evans have amplified these messages to their millions of followers.

6) The ‘plandemic’ and weaponising of COVID-19

In the QAnon world, debates about the origin of the coronavirus, death rates, definition of cases, testing protocols and possible treatments are underpinned by a belief that governments are covering up the truth. Many believe the virus isn’t real or deadly, or it was deliberately introduced to hasten government control of populations. 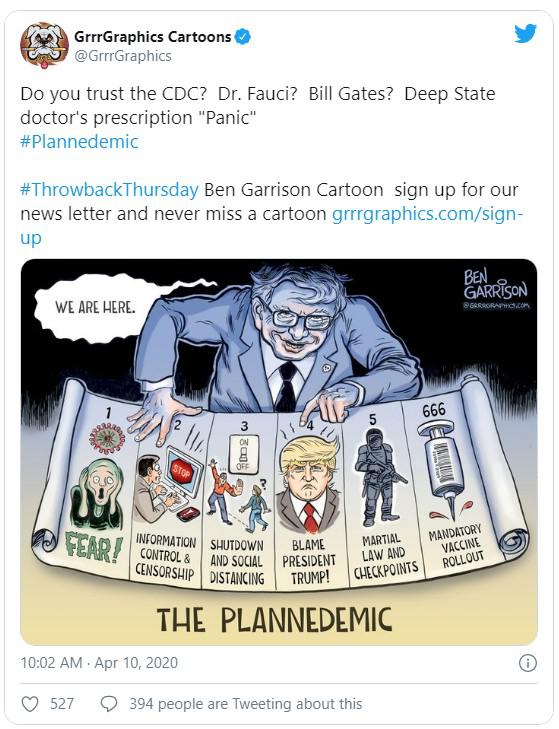 Understanding why people become part of these movements is the key to stopping the spread of the QAnon virus. Research into extremist groups shows four elements are important:

This year, some of these grievances have been linked directly to the pandemic: government lockdown restrictions, a loss of income, fear about the future and disruption of plans such as travel.

Social media has given people the ability to find others with similar grievances or beliefs, to share doubts and concerns and to learn about connecting theories and explanations for what may be troubling them.

QAnon is very hierarchically structured, similar to evangelical Christianity. QAnon followers join a select group of truth seekers who are following the “light” and have a duty to wake up the “sheeple”. Like some religions, the QAnon world is welcoming to all and provides a strong sense of community united by a noble purpose and hope for a better future.

In the QAnon world, spending many hours on social media is valued as doing “research” and seen as an antidote to the so-called fake news of the mainstream media.

Social isolation, a barrage of changing and confusing pandemic news and obliging social media platforms have been a boon for QAnon groups. However, simply banning or deleting groups runs the danger of confirming the beliefs of QAnon followers.

So what can be done?

Governments need to be more sensitive in their messaging and avoid triggering panic around sensitive issues such as mandatory or forced vaccinations. Transparency about government actions, policies and mistakes all help to build trust.

Governments also need to ensure they are providing enough resources to support people during this challenging time, particularly when it comes to mental and emotional well-being. Resourcing community-building to counter isolation is vital.

For families and friends, losing a loved one “down the Q rabbit hole” is distressing. Research shows that arguing over facts and myths doesn’t work.

Like many conspiracy theories, there are elements of truth in QAnon. Empathy and compassion, rather than ridicule and ostracism, are the keys to remaining connected to the Q follower in your life. Hopefully, with time, they’ll come back.