A stamp of approval for legendary sports commentators...

Australia Post recently released a commemorative World of Sportset of stamps celebrating six Australian sportscasters. Billed as “household names in their respective sports”, they are all men.

Richie Benaud, Reg Gasnier, Les Murray, Lou Richards, Jack Dyer and Bob Davis should be acknowledged - they have made an enormous contribution to Australian sport and its coverage. “Australia’s love of sport,” said Australia Post Philatelic Manager Michael Zsolt, “extends to the voices that bring each game to life”.

Though these commentators are no longer on the airwaves, sports journalism remains largely masculine, even at a time when women’s professional sport is growing quickly and women’s teams are building strong fan bases.

Against this backdrop we ask, what about female sportscasters, their influence and significant contribution to Australian sport?

A 2017 US study of newspaper readers confirmed the obvious: female sport journalists are judged on their physical appearance more than their male counterparts. Their sexual desirability is rated and discussed.

Earlier examples of this behaviour, frequently framed as “humour”, included the objectification of Caroline Wilson, then chief football writer for The Age, by a co-host of The Footy Show (AFL) who stapled her photograph on a mannequin dressed in lingerie.

Though West Indian cricketer Chris Gale apologised for propositioning a female journalist during a live sideline television interview, his behaviour was indicative of the practices and behaviour female sportscasters experience.

This year, ESPN journalist Belén Mendiguren was the subject of inappropriate sexist remarks. Her experience reminds us of how difficult it is to challenge entrenched inequities.

New media platforms are increasingly spaces where female sportscasters are targeted for simply doing their job. The ability for consumers to access sport news digitally has also seen more direct contact with sportscasters. Harassment and threats of sexual and other violence are common.

Former Olympic swimmer and sport reporter Judith Joy Davies could certainly mix it with the men most recently commemorated. Billed by some as Australia’s first female sportswriter, she covered the 1954 Commonwealth Games in Vancouver and the 1956 Olympics in Melbourne. Awarded the National Press Club Award for Sports Journalism in 1982, Davies was also a celebrated broadcaster. Her sharp wit together with “the lift in her voice” were said to engage and “carry listeners with her”.

Her 2011 induction to The Sport Australia Hall of Fame rightly recognised Davies’ contribution to Australian sportscasting.

In the contemporary era, Debbie Spillane’s sport broadcast career could certainly be celebrated. Her 1984 appointment with the ABC marked a first for full-time female broadcasters, as did her involvement in cricket commentary. As host of ABC Radio’s Grandstand program and through sport columns with The Sun-Herald and The Australian, Spillane has garnered accolades including the 2017 Australian Sports Commission Media Award for Lifetime Achievement.

Another notable female sportscaster and respected sports journalist is Tracey Holmes with her highly regarded weekly sports panel show The Ticket. As a senior ABC reporter, her program and podcasts often consider issues around diversity and she frequently tackles gender inequality in sport. 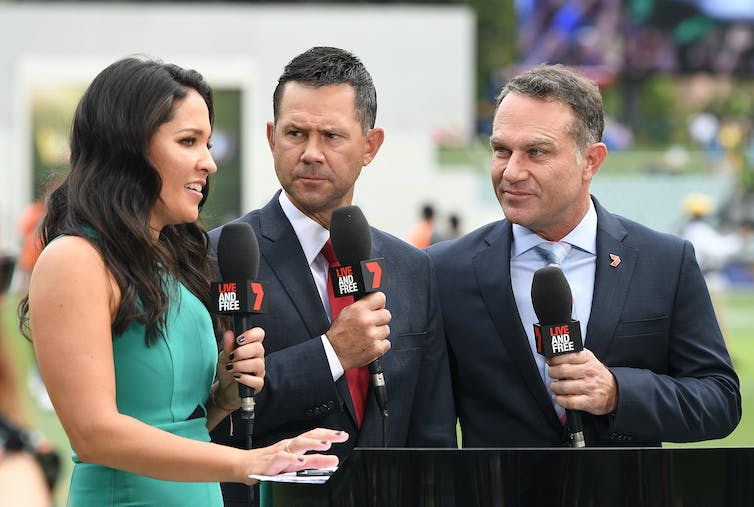 Following the professionalism of women’s cricket, AFL and Soccer, opportunities for female sport journalists and commentators continue to grow. Women gaining experience in this space include Daisy Pearce calling the AFLW and Alison Mitchell who is a test match cricket commentator and regular on ABC’s Grandstand.

Cricket has led the promotion of women’s opportunities in the commentary box. This lead was likely spurred by the negative attention directed at the Nine Networks 2017 distinctively all-male commentary team.

An ABC Grandstand commitment to a 50-50 gender split in the commentary box has been followed by commercial gains. The addition of women’s voices and views included a ratings jump in key AFL cities Melbourne, Adelaide and Perth.

This is actually changing the face of what sports commentary looks like, to bring different flavours, options and expertise.

Grassroots action is further challenging the status quo. The Outer Sanctum podcast is an all-female footy fan panel that made immediate headlines calling out derogatory comments about female athletes and journalists. They have since been part of the push to call out gendered language in sport.

This week, new webisode show All In debuted with hosts Samantha Lane and Emma Race enjoying a casual chat with footballer and boxer Tayla Harris.

Siren, a collective of Australian women’s sports advocates, content creators and fans are using their knowledge to elevate women’s voices.

These initiatives, alongside what appears to be a wider appetite for diversity in sports broadcasting, is enabling a broader range of voices to call and write about Australian sport. They may not sit still long enough to pose for postage stamps.