Deep in the Pacific Ocean, hot magma sporadically erupts out of the seafloor, and mostly goes undetected.

In some cases, billions of frothy volcanic fragments bob to the surface, creating a floating mat of pumice – a ‘pumice raft’.

Pumice rafts are rare. Only a few occur each decade. In August last year, a massive pumice raft was produced by a submarine volcanic eruption near the Kingdom of Tonga, in the Pacific Ring of Fire.

The pumice raft immediately spread over 200 square kilometres, about three times the size of Hobart city.

“This helped us understand the style of eruption and its potential threat to maritime traffic.” Sentinel-2 satellite image of the pumice raft on day 4 of dispersal.

Dr Jutzeler tracks the movement of pumice rafts around the world in collaboration with oceanographers at the Institute for Marine and Atmospheric Research in The Netherlands and the University of Southampton in the UK, and volcanologists at the University of California, Berkeley.

The team uses a statistical model to simulate and predict how pumice rafts disperse over time caused by surface ocean currents, wind, and wave action.

“By comparing the simulations with satellite images, we can forecast dispersals a week to a month ahead and model the most likely directions of movement,” Dr Jutzeler said.

In 2019, this information was sent twice a week in the form of hazard maps to the shipping community in the Tonga-Fiji area.

Access to this information meant that mariners and fishers could make decisions that would reduce the likelihood of a collision with pumice raft debris.

“Despite its porous, lightweight appearance, pumice often gets clogged in the vessels’ cooling systems, effectively blocking engines. It can also abrade propellers and scrape the hulls of ships, leading to maintenance costs, not to mention the paint debris left in the sea.” 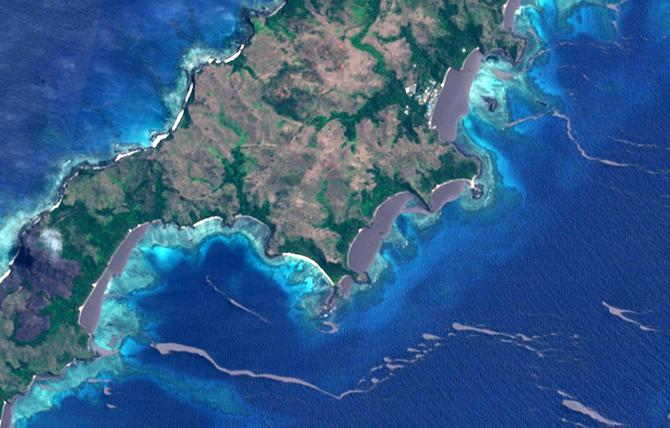 Floating obstacles like pumice can also cause damage to cargo carriers and supply chain logistics. Given that more than 80 per cent of the world’s cargo is transported by sea, a major disruption to cargo shipping is less than favourable, especially during COVID-19.

Dr Reza Emad of the Australian Maritime College (AMC) is a specialist in merchant shipping. He says that pumice rafts have the potential to cost the cargo industry millions of dollars in damage and supply chain disruptions.

“In shipping we look at the phenomenon of pumice rafts as a danger to navigation and we try to avoid this as much as we can."

Pumice is a potential hazard to the value of the ship, the cargo being carried and the environment.

Floating pumice can also hinder the accuracy of navigation systems.

“Ships rely on radar signals to figure out how close they are to the coast and other boats. The radar wave reflection of solid matter such as pumice may cause a blank image, meaning no useful data is received,” Dr Emad explained.

“This is especially dangerous in coastal areas and near harbours where traffic is dense, and any pollution created as the result of marine incidents can be catastrophic. For example, tankers can carry hundreds of thousands of tonnes of oil, which could have a major impact on the environment if damaged from a collision.

“Any information about the whereabouts and course of obstacles like pumice is very helpful for ship navigation and the shipping industry as a whole." Dr Martin Jutzeler talks about his research of submarine volcanoes and the giant floating rafts of pumice they sometimes create.
Still wondering where to begin?