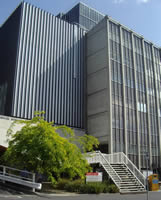 Locate the Library in Google Maps Albert Baikie graduated from the University of Glasgow in 1949. While in Scotland, he studied the clinical effects of radiation and the cytogenetics of human leukaemia. He moved to the University of Melbourne in 1963 and retained an active interest in clinical haematology and cytogenetics. In 1965 he became a Member of the Royal College of Pathologists of Australia (Fellow in 1971) and in 1966, a Fellow of the Royal Australasian College of Physicians. He was appointed Chairman of the Scientific and Grants Committee of the Royal Children’s Hospital Research Fund in 1967 and was a member of many committees, including the President of the Australian Haematological Society and the Chair of the National Health and Medical Research Council.

Following the decision to establish a Faculty of Medicine in the University of Tasmania, Albert Baikie was appointed, in 1967, as Foundation Professor of Medicine. He is credited with the success of the development of Hobart’s Medical School from its establishment.

On 25 June 1976, University Council agreed that the Clinical Library should be named the “Albert Baikie Clinical Library”, and a naming ceremony took place on 28 April 1977.  Dr Baikie’s photograph and a landscape painted by Tasmanian artist, Jack Carrington Smith was donated by Mrs Baikie and hangs in the Library.  The Library also incorporates "The Lade Memorial Library”.

A subscription to the journal Nature Aging has been made possible by the A.G. Baikie Memorial Fund.  This fund was set up by the friends and colleagues of Professor Baikie after his death, to honour his contribution to the medical profession.