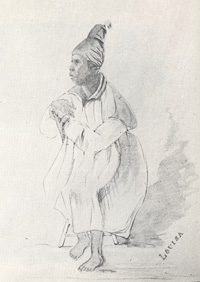 Also known by four other names:

Bullrer's Trouwunnan homeland was a territory at Tebrikunna in the far northeast region that belonged to the Pairrebeenne clanspeople. Tebrikunna is now known as Cape Portland. The Pairrebeenne clan was one of seven to ten clans that made up the Coastal Plains nation. Bullrer claimed she was a young girl about ten years old when she was taken from her clan to eastern Bass Strait. She lived with Straitsman James Munro on Preservation Island until she left with boatman James Parish to assist the military with the Line operations (in 1830). At Robinson's behest she joined his expedition at Launceston as a guide into the northeast region (in August 1830). Bullrer spoke English well and, according to Robinson's judgment, she was a 'very intelligent' woman of small build, about 156.03cm in height.

Bullrer was the daughter of Pairrebeenne clanswoman Bullrub, also known as Poolrerrener. Her younger brother was Edward Tomlin who had a European father. When Robinson first met young Edward Tomlin on Robbins Island, off the northwest coast of Tasmania, he was about seventeen years old and worked as a boatman with some Straitsmen who were hunting seals. It appears that Bullrub was taken from her country at Tebrikunna by mariners who took her to Kangaroo Island, South Australia within a few months of Bullrer's birth. After her mother left, Bullrer would have been raised by her clanswomen from a baby and she remained separated from her mother until she was a woman.

Bullrer was about eighteen years old in 1830 when she was engaged as one of Robinson's eight guides. Having lived amongst the Straitsmen for about ten years she was also a valued informant to Robinson about the lifestyles and experiences of her female companions who lived with the Straitsmen. In 1831, on her return to Preservation Island she gave Robinson a gift of some crystals that had been fond in the islands. Robinson recorded Bullrer's change of name to Louisa when she moved to the Wybalenna and she was still living at the establishment in 1836. Louisa was still alive in 1845 and she is listed as having married two men - Tarnebunner (Plomley, 1966: 985, 995) and later Carlerwarrermeer from Big River Nation who was also known as Tippo Saib, King Tippo (Plomley, 1966: 909, 985 & 995; Supplement to Friendly Mission: p24). There is some confusion in the records about the year she died. (Plomley, 1966: 1000).