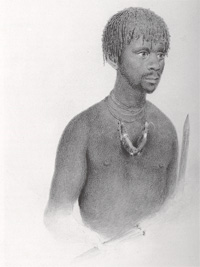 Also spelt as Timmy, Timme was known as Marlapowaynererner or Maulboyheenner (small boy). Timme had not reached his teens when he witnessed the vessel Sally breaking apart in Ringarooma Bay during a violent storm in 1826. Only the Sally's master and a cabin boy survived the tragic event, with all of the 15 passengers drowning amongst the wreckage.

Timme was given the name Robert by Robinson after arriving at Wybalenna in 1836. He was about 15 years old when he joined Robinson at Launceston in 1830. Robinson described Timme as 5' 9" [174 cm] tall, being 'intelligent, finely formed' muscular and shrewd (Plomley, 1987: 849 & 808). Timme's father, Raleleeper or Rolepa, was a clan leader from Georges Rocks and he was most likely following in his father's footsteps, as artist Thomas Bock depicted him carrying a fire brand, wearing ochred hair and beard, and wearing a human jaw bone around his neck.

Timme was married to Semiramis or Jenny who was from Port Sorell. He was 'captured' when he was a boy by a roving party and accompanied Robinson on his expeditions around the island between 1830 and 1835 and to Victoria in 1839. Timme was hanged beside Peevay in Victoria on 20 January 1842 after being found guilty of murder. He was 27 when he died on the gallows.